The true brown recluse spider (Loxosceles reclusa) does not live in Arizona, but two closely related species have been reported in the state. They are quite similar to the brown recluse and can be distinguished only by an expert. The Arizona species are Loxosceles arizonica and L. deserta. Three other species, one from the southeast corner of the state (and the New Mexican and Mexican Chihuahuan Desert), one from the Grand Canyon and one known only from Sabino Canyon in the Santa Catalina Mountains near Tucson, have not yet been described, but will eventually be named by Dr. W.J. Gertsch. 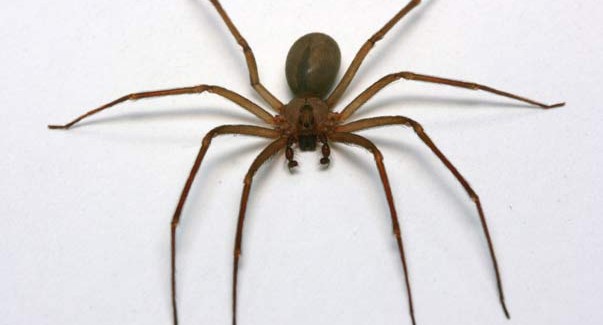 Loxosceles arizonica is very common in our state and L. deserta is fairly rare. For the sake of simplicity, all five species will be referred to as brown spiders and all should be considered equally menacing. There are numerous species of brown-colored spiders in Arizona, but the name “brown spiders” here refers only to members of the genus Loxosceles. The brown spiders can be distinguished from all others by the following characteristics: The body of the adult is about 9 mm long and the leg span is about 25 mm. The color is tan to brown and there is a distinctive violin-shaped darker marking on the cephalothorax, with the neck of the violin pointed toward the abdomen. Brown spiders have three pairs of eyes on the base of the violin. These are difficult to see without a hand lens. Other spiders that might be mistaken for brown spiders have four pairs of eyes rather than three and do not have the violin.

The brown spiders of Arizona are normally found under rocks, scraps of wood or dead cactus, in wood rat nests or in other similar sites in the desert. They also occupy dark places in buildings in desert locations. They seem not to thrive in irrigated areas, preferring dry habitats, but may be brought into homes on firewood or pieces of cactus skeleton collected from the desert. In their normal habitat they spin a coarse, sticky, irregular web of very white silk, on which they are usually found in the daytime. They apparently forage at night in search of prey. Envenomation: All species of Loxosceles are seriously venomous to humans.

The common name black widow spider specifically belongs to the eastern species Latrodectus mactans, which does not occur in Arizona. Latrodectus hesperus, our species, is very similar to the true black widow. The adult female has a shiny black (occasionally dark brown) body approximately 1.5 cm long and slim black legs with a span of about 4 cm. The most famous and easily distinguishable characteristic of this species is the bright red hourglass-shaped marking on the underside of the bulbous female abdomen. Immature females have red-, brown- and cream-colored markings on the dorsal surface of the abdomen and a cream-colored hourglass. Males are much smaller than adult females (about 1/20 the size) and, like immature females, are patterned with red, brown and cream.

Female black widows are generally found on their irregularly shaped webs near the ground. Common web sites include protected corners and entranceways to houses, between stones and flower pots, in woodpiles, rodent burrows, garages, storage buildings, outhouses and barns. Female widow spiders seem to favor certain spots around structures. Favored locations, once identified, can routinely be predicted to contain a spider, even if the occupant is regularly removed. They are not commonly found inside modern homes.

The female requires a shaded, secluded resting place where she spends the daylight hours if her web is constructed in an open area. The life history of the black widow spider from egg to maturity requires about four months under laboratory conditions, but probably considerably less time outside where temperatures are much higher. Mating is an elaborate process that begins when a wandering male encounters the webbing of a female. The male approaches the female cautiously while sending vibratory messages to her through her web. If she is receptive, she will remain motionless long enough for the male to deposit sperm. After insemination, the male usually lingers on the female’s web until she eats him. This sacrifice contributes nutrients to eggs that the male’s sperm will posthumously fertilize.

The members of the Pholcidae family live in houses and buildings. They make their untidy webs in the corner of a wall or a ceiling. They are also often found in basements or cellars, thus being referred to by another common name as the cellar spiders. When they are disturbed or when they are under a threat of attack, they start vibrating in their web violently to scare off and discourage their enemy. Therefore, they are also known by yet another common name of vibrating spiders. The male spider has large palps.

The venom of this spider is one of the most poisonous. But as the fangs of these spiders are too small to penetrate the skin, it is not considered a dangerous spider.